Radar Antennas: what they do and how to choose the right one for you

Arguably, one of the surest collision avoidance technologies on board is considered to be the radar unit. And even if we at SVB actively promote the AIS Class B for use in the water sports sector and co-develop new systems, we still do not recommend going without a radar unit on board for your own safety. If the on board radar unit is set up correctly and you, as the user, know how to safely operate it, it can prove to be most reliable before colliding into other vessels or objects, which are not shown on the chart, especially in poor visibility or fog. 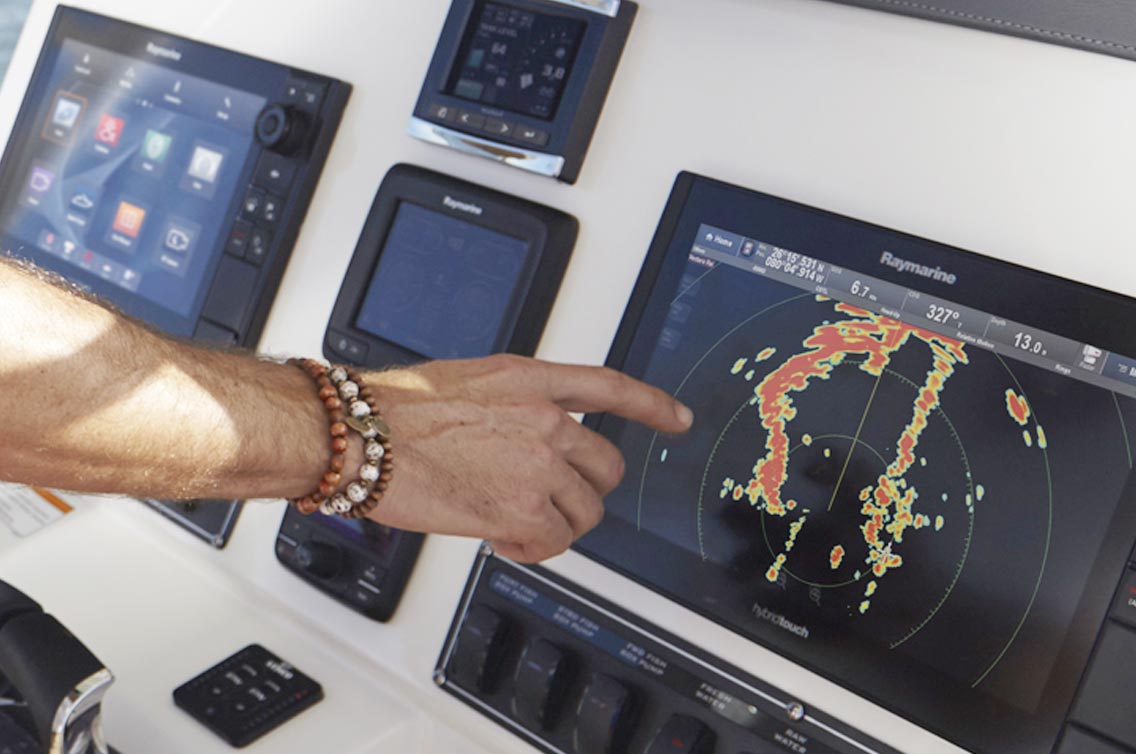 What does a pulse radar do on board?

The word radar stands for "Radio Direction Finding and Ranging" and describes a position and distance determination through the transmission and reflection of radio waves. These short, electromagnetic waves, also known as pulses are emitted by your radar antenna on board. When these impulses collide with other vessels, buoys, a surrounding port facility or the like, they are reflected and picked up by your radar antenna again. Your connected radar equipment or your radar-capable multifunction display evaluate the information sent, provide a reading for potential obstacles and objects, calculate your distance from them, and also determine their direction/bearing as well.
Through the continuous rotation of the radar antenna, a uniform dispatch of pulses is generated in all directions, ensuring that not just one side of your vessel is monitored. Modern radar units, such as the ones that SVB offers, are described as daylight radar or raster-scan radar units and forego traditional writing beams. Rather, the radar system converts the received data into coordinates, and provides the individual pulses received in the form of a grid, making them easy to read, even in daylight.

What is the big advantage of radar technology?

Unlike AIS (Automatic Identification Systems), while using a radar unit, YOU determine if you see an approaching ship due to the fact that your radar antenna transmits and receives the data needed for this specific localization. When using AIS systems, you only see a ship or obstacle that sends its own specific AIS data. Although the use of AIS in commercial shipping is mandatory, this is still unfortunately not the case in regards to recreational marine vessels. So in order to minimize the risk of a possible collision in extreme fog, in the dark, or in heavy rain, we recommend that our SVB water sports experts purchase and use a radar unit, in addition to their AIS transponder.

Can pulses be lost?

Radar antenna waves move at the speed of light. The time between transmitting and receiving the waves is generally so short that your radar antenna only moves a minimal distance between waves. Nevertheless, our radar brands: Garmin, Raymarine, Simrad, B&G and Furuno function to make it possible to switch to more distance ranges, whereby the system then automatically lengthens its pulses, in order to keep them as low as possible, making up for any potential losses.

Hints and tips on using your impulse radar

A problematic feature of radar units is their environmental and obstacle representations, which can be read and interpreted correctly with a little practice. Make sure that you first select the correct bearing alignment for each new radar unit! Also note that the size of displayed objects are not necessarily proportional to their true size, depending on the following factors:

The perfect target for your radar device is located vertically to the water's surface, is rectangular with no round corners, is metallic, has a large surface area and it located at the same height as the radar antenna.

Another problem concerns the display of image quality, which is affected by sea conditions, false echoes and glitches. A false echo occurs when the sent pulses from the radar antenna make contact with heavy rain or swelling waves. Echoes from storm fronts and heavy rain are composed of many small pulses, which are constantly changing in size, intensity and direction. These echoes are usually displayed on the radar display as large, dot-like areas. One positive effect of this "fault" is that, for example, thunderstorms can be recognized early. Another fault and misrepresentation can occur when several ships are using radar units on board within the same range. These glitches appear on your radar in the form of helically arranged points in center of your screen. Most manufacturers offer radar technology with interference suppression settings, which can soften and filter out these errors.

Always remember that your radar antenna is at the center of the radar display and therefore does not move. The movement of your ship is rather in the movements of the echoes pictured with is that movements are relative. This also means that items like a ton or land portions that are fixed that move on your screen. If your screen center - so you - now an echo ever approaches, you should be in the truest sense "noisy", look for and initiate, where appropriate countermeasures and evasive action. An avoidance maneuver should (see Rule 19 of the international collision avoidance rule, "Convention of the International Regulations for Preventing Collisions at Sea" in poor visibility) are performed to starboard normally here.

Imagine, two kilometers away from you maneuver two more ships. These are located in the same bearing from you. To ensure that your radar separately recognize these two goals and may represent the goals to have more than half a pulse length (half the actual duration of the pulse from the antenna to the target and back) are away from each other. If this is not the case, it may be that, for example, a plurality of densely located boats are displayed as a Large. To ensure a clear target definition even at close range, you should reduce the pulse width of your radar antenna here. For this you can change in your radar system, the nautical areas which then automatically adjusts the pulse length.

Our SVB Tip: Our SVB water enthusiasts use on board a regular opportunity the radar image with other images, such as AIS, GPS and the electronic chart to compare and superimpose. So that unclear radar images can be more easily with the same orientation of the individual images. In addition: practicing, try and ask! Our experts are ready to help with any questions. Only with practice you will be the complicated appearing radar representations Lord and you can safely assign and interpret. 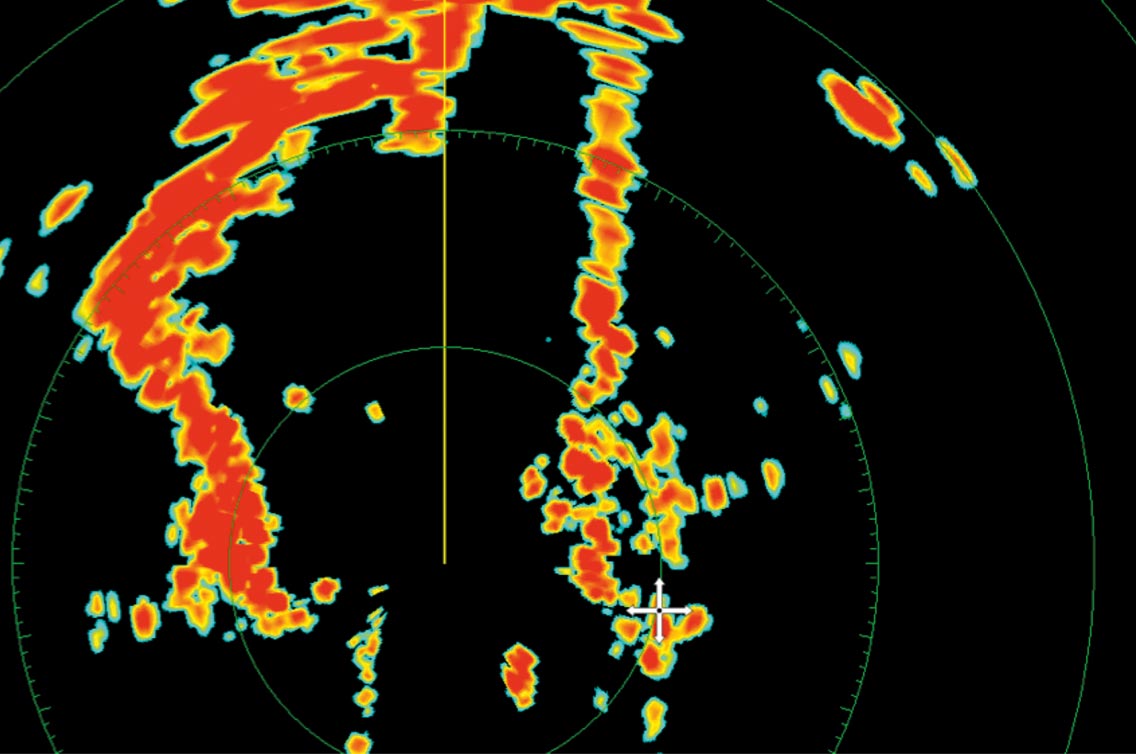 The optimum radar antenna and its mounting

Traditional radar antennas are available in two different forms: as a rather round Random bowl or elongated narrow slot radiator / beam antenna. When choosing your radar antenna you will go most likely be the first after the space available on board and the price of the antenna. We recommend in pulse radar systems always opting for the widest possible model, because the wider the radar antenna fails, the narrower is their so-called opening angle. The opening angle of the beam image / of the main lobe of the radar system is important to determine the severity of the bundling of the radar beam. This means in turn that your radar targets juxtaposed in other distances will identify even separated.
In general, the larger the radar antenna, the narrower the angle - this in turn means a larger area and better target presentation. The radome antennas with 46 or 61 cm ø offer than the biggest area of ​​48 nautical miles and have an opening angle of 4.9 ° and 3.9 °. The best score of the open array scanner with a beam of 133 cm. Here a range of 72 nm at an excellent angle of only 1.75 ° achieved.

Have you now decided on a radar model then your next consideration is likely to be its attachment. Because not only the shape of the radar antenna influences the range of the antenna but also the height of the mounting on board. First of all you should know and remember that the waves of impulse radar antenna is too close, regular contact may be harmful. We therefore recommend that your new radar antenna to place necessarily so high that your crew, so of course the entire deck area of ​​your ship, is in the blind zone. The blind zone / the blind spot of a radar antenna is the area outside the (vertical) opening angle of its main lobe.

This blind zone is positive for the Crew in the area of ​​the vessel, as it protects them from harmful rays. For the reflection of other vessels or objects, you should turn to make sure your antenna your crew speak leaves in the shade, but is not mounted too high, because then the dead zone is even further. The pulses meet here so later on the water surface and the close range decreases.

When one sees yachts radar antennas usually on mast placed, because this saves space and provides especially where appropriate, for more coverage. This is of course only at round Random antennas. For this we offer you different mast mounts from different manufacturers. A particularly clever invention in this field is the gimbal suspension mast, because this self-leveling mount optimizes the antenna performance many times. No matter how much rock your boat, the radar antenna is always in a horizontal position and thus provides better radar images.

We recommend that you read the operating instructions of the antenna as well as your display monitor read thoroughly, before using your new radar system on the water. Familiarize yourself with the features of your system and test them, in the harbor if necessary.

SVB uses Cookies to guarantee you your purchase as simple as possible. Within further usage of our pages, you will accept that we use cookies. Learn more...  Ok